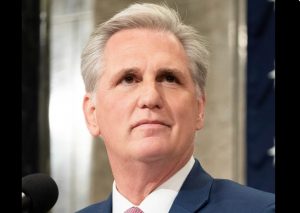 House Minority Leader Congressman Kevin McCarthy (R-Bakersfield) delivered a speech on the House Floor on how the House Democrat drought and wildfire bill fails to deliver for our community.

McCarthy was Tuesday’s KVML “Newsmaker of the Day”. Here are his words from July 29th:

“Mr. Chairman, while it’s been described as a solution to both the drought and the wildfires devastating western states, this bill does little to address either issue.

In my district, the community of Tooleville has run out of water as the groundwater table drops and aging infrastructure fails or becomes obsolete. While the long-term solution is to connect Tooleville to the City of Exeter’s drinking water system, that can be expensive for both Exeter and Tooleville. This amendment would reduce connection costs for Tooleville residents while also enabling Exeter to increase its water supply to meet increased demand with its new customers.

Tulare County advises me that if California’s drought continues, more small and rural communities in my district with older infrastructure could meet a similar fate as groundwater tables drop, making this amendment even more important. We can’t leave our western communities vulnerable to drought and aging infrastructure, and I encourage my colleagues to support my amendment.

Mr. Chairman, I ask unanimous consent to insert into the record a letters supporting my amendment from the County of Tulare, the County of Kern, and the City of Exeter, all of which are located in my congressional district.

Communities like Tooleville won’t get access to the water they need by Congress spending billions of dollars on studies, plans, or new red tape for much-needed water infrastructure projects.

If this Majority were serious about addressing the drought, they would ensure we can capture water and snowmelt in wet years by investing in new reservoirs and expanding existing ones today. Instead, my Democrat colleagues, led by the Speaker, have fought for years to block the near shovel-ready Shasta Reservoir Enlargement Project.

From their opposition to expand water supplies through Shasta or bringing more water to the Central Valley and southern California by extending the bipartisan WIIN Act, the Democrats seem intent on making it even harder to bring water to our communities that desperately need it to survive. The Natural Resources Committee has refused to act on any of the bills introduced this Congress or last Congress to extend key California water conveyance provisions from the WIIN Act. And on top of this, the Biden Administration is working to roll back science-based, peer reviewed regulations issued under the last administration, which would create even more hurdles to bringing water to the Central Valley and southern California from the Delta.

Even on this bill, where my colleagues offered common-sense amendments to address these and other California water issues and put them to a vote, Democrats failed to make even one other Republican amendment in order.

Unsurprisingly, the wildfire provisions of this bill are no better. This legislation includes no new authorities for the land management agencies protecting our forests, nothing to stop frivolous lawsuits from tying up critical management projects, and no streamlining provisions to address the bureaucracy that stops federal agencies from conducting fire prevention activities before the forest burns.

The West is literally on fire right now.

This bill would do little, if anything, to prevent these fires in the future. It locks up 58 million acres of roadless areas, making it harder to reduce the hazardous fuels in our forests and parks that cause large fires. In fact, it’s so poorly drafted that it could result in lay-offs of more than 600 federal firefighters during the fire season!

Nothing in this bill would make much-needed updates to the National Environmental Policy Act also known as NEPA, the Endangered Species Act, or the National Historic Preservation Act. These laws have resulted in a bureaucratic nightmare of red tape that has delayed critical forest management projects. They are used by extremist special interests to bog down agencies with frivolous lawsuits designed to stop nearly all work in our forests and national parks.

These laws have become the very reason we cannot get critical forest management projects done quickly, and the results are devastating to the environment, wildlife, and historic resources in our National Forests and parks.

And egregiously, there’s not a single mention in this bill of our most iconic trees – the Giant Sequoias – that are under significant threat from the wildfires raging in the west.

“Growing up in California, I had always understood the significance of these trees. In fact, they are so iconic that the Giant Sequoia is the official logo for the National Park Service.

“These trees have stood on this planet for more than 2,000 years. Yet, in the past 3 years, we have lost nearly 20% of these iconic trees to catastrophic fires. The last time this occurred was in 1297 – more than 700 years ago.

That’s why earlier this year, I took a bipartisan Congressional delegation to my district to see firsthand the devastation the Castle Fire wreaked on the Sequoia National Forest, its Giant Sequoia groves, and nearby communities.

On this trip, my colleagues and I learned more about Giant Sequoias, including their resiliency to fires, and had the opportunity to compare the difference between groves that were properly treated prior to wildfire season versus those that were not. The contrast couldn’t be more stark.

And though we’d been briefed on what we were about to witness, nothing could prepare us for the extent of the devastation.

The poor state of these Giant Sequoia groves was shocking, and in many areas, all that was left of these trees – which had once stood hundreds of feet tall – were short stumps now charred and blackened. The patches of desecrated forest were evident as far as the eye could see, and though the extent of the destruction we saw was devastating, what made things worse was learning from the experts on the ground that these fires and their destruction could have been prevented with the right tools and forest management techniques.

As my colleagues and I soaked it all in, we knew that we had to act, and soon.

That is why my colleagues and I introduced the bipartisan “Save Our Sequoias” Act to immediately declare an emergency and save these iconic trees, and why we offered it as an amendment in this bill.

This commonsense legislation would give the Forest Service, National Park Service, and Bureau of Land Management the necessary tools to respond to the unfolding fire-related disasters in the Giant Sequoia groves and surrounding areas in the Sierra Nevada.

Specifically, it would reduce the risk of catastrophic fires by enabling these agencies to use emergency authorities to expedite hazardous fuels removal projects in these areas. It would also remove the barriers that prevent the Forest Service and local experts from taking action to protect these trees and nearby communities. It would provide funding for a comprehensive reforestation strategy to rebuild the resources we have already lost. I want to thank my colleagues on both sides of the aisle for the months of work put in toward crafting this bipartisan legislation.

As we debate this bill today, not only is the Washburn Fire threatening over 500 giant sequoias in Yosemite National Park, including the world’s largest and oldest tree, the Grizzly Giant, but another fire, the Oak Fire, has sprung up near the park over the weekend.

The Oak Fire, which is only 26% contained, is threatening Giant Sequoias and has forced the evacuation of many area residents.

That’s why it is shocking that House Democrats did not make this bipartisan amendment in order. This is an immediate crisis, and we can’t afford to wait.

The American people, especially those in the West, deserve more. Fires and droughts are not partisan things – they affect both Republicans and Democrats. But there’s no excuse for wasting time on bills that just pay lip service to wildfires and our Giant Sequoia groves. We must not be the generation that stood by as the flames of wildfires and a fealty to bureaucratic red tape damned these ancient natural wonders out of existence. We must act now on the bipartisan solutions to address these critical challenges.

Thank you, and I yield back the balance of my time.”