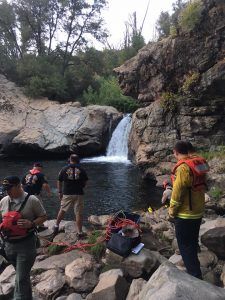 Update at 10:15 p.m.: Emergency crews have recovered the body of a girl that drowned at Rainbow Pools in the Groveland area Saturday afternoon while vacationing with her family.  Tuolumne County Sheriff’s spokesperson Sgt. Andrea Benson confirms that 11-year-old Natalie Garcia of Empire slipped and fell while crossing over the rocks above the falls. Sgt. Benson states, “The girl hit her head on the rocks as she fell into the falls. Several concerned witnesses jumped into the water to try to save her but were unsuccessful.” Members of the Tuolumne County Sheriff’s Search and Rescue team along with the Stanislaus County Sheriff’s Dive team scoured the pools for several hours and found her body under the falls in about 15 feet of water. The incident happened just before 3:30 p.m.

Update at 5 p.m.: Tuolumne County Sheriff’s spokesperson Sgt. Andrea Benson has confirmed that at 9-year-old girl went under the waterfalls at Rainbow Pools in the Groveland area. She adds that the sheriff’s search and rescue team along with the Stanislaus County Sheriff’s Dive team has been called to the scene to help try to locate the child.

Original post at 4:35 p.m.: Rainbow Pools, CA — Emergency crews have been called to the Rainbow Pools off Highway 120/ Big Oak Flat Road for a possible drowning.

Cal Fire has confirmed to Clarke Broadcasting that the Tuolumne County Sheriff’s Department Dive Team has been called to the scene near Cherry Lake Road. Additionally, the CHP has confirmed that officers are heading to the area to provide traffic and crowd control. There are reports that a small child went under the waterfalls there.

Forest Service Officials are also assisting with the incident.