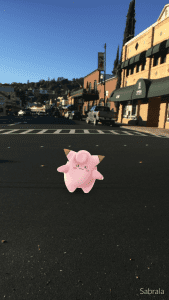 There is a new group of people traveling in Sonora to keep an eye out for, they are playing the new most downloaded app on their phones, Pokémon Go. It continues to bring 100 or more people to downtown Sonora in addition to those in town for the Mother Lode Fair, which continues into the night Sunday. The new game players in downtown are in addition to the March for Climate Action, a modest 30 or more strong, and the usual evening revelers that spill out of the local bars.

The goal of Pokémon Go is to hunt and capture animal-like creatures called Pokémon which can pop up anywhere. Pokémon is the name of a card game and a popular late 1990’s children’s cartoon show featuring a boy, Ash Ketchum, and his Pokémon Pikachu who collect and fight other animal-like creatures. See the attached photos for views of the augmented reality (AR) Pokémon Go game visuals of various Pokémon creatures as viewed through an iPhone in Sonora. Pokémon Go is the number one free app in Apple Inc’s U.S. iTunes store and the top grossing ap as well. Pokémon Go launched on Wednesday and can be played with both Android and Apple phones and tablets.

As people wander around playing Pokémon go in Sonora and elsewhere, seeking to capture all 149 different Pokémon creatures, they choose a team. Yellow team, called Intuitives-Team Instinct, are quite popular locally with at least 30 identified in downtown today. Red is also popular, they are team Valor, and Blue team, the Mystics, are more rare but gaining strength at virtual training gyms. Players seen locally were from 20 years old to about 30, with two children under 10 and couple over 50 years old observed playing as well. Many players are wandering in WalMart in search of Pokémon according an employee. One player likened the game to a more fun version of geocaching.

Virtual locations that offer bonus game points and training gyms are available only at real world historic markers and plaques. The Sonora gyms are at the Red Church, Courthouse Park, near the Washington/Stockton intersection and near the KVML/KKBN/KZSQ radio station.

At least 50 players were out late Friday night and again Saturday night due to the game being unavailable during the day. Much like when Twitter became extremely popular Pokémon Go has struggled to keep serving their game to thousands of players across the country.

The Associated Press reports the game only counts distance if you’re moving less than 20 miles per hour. AP also reports a few players have been injured when they were not fully aware of their real world surroundings. The game developers, highway patrol and other authorities across the country encourage safe and common sense play. There have been no reported injuries or issues with loitering in Tuolumne yet. Game players note they are limited in their time playing downtown by a lack of available power outlets for the public to recharge their phones.

Pokémon Go was created by Niantic Inc., a San Francisco spinoff of the Google parent Alphabet Inc. that previously became known for a similar augmented-reality game called “Ingress.” It was widely reported that Nintendo stock went up 10 percent this week, Nintendo has a one-third holding in Pokémon Company. Nintendo is also behind Pokémon Go Plus — a watch type accessory that alerts Pokémon Go players when they come close to Pokémon. The watch accessory is available for pre-order now, costing $34.99.