Update: Cause Of 325 Acre Appaloosa Fire Determined, Power Restored To Most Customers 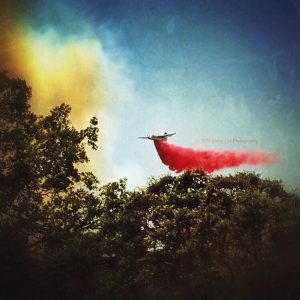 Update at 10:15 p.m.: PG&E reports power has been restored to all but 1,660 customers in Calaveras County out of the more than 10,800 originally without electricity related to the Appaloosa Fire. Company spokesperson JD Guidi reports that slowly throughout the afternoon and evening the lights went back on incrementally bringing the number to more than 5,000 customers Saturday evening at around 9 p.m.  At that time, he says that CAL Fire allowed the company to re-energize its transmission line restoring power to most customers. Guidi adds that those still without electricity should have their power back on around 11 p.m.

A special thanks to our community news partners Jenny Lee, Kyle Hampton, John Adema, Richard Treadway and Martin Miles for sending in photos. Pictures can be e-mailed to news@clarkebroadcasting.com.

Update at 9 p.m.:  CAL Fire reports ground crews will continue to try to establish hose lines around the Appaloosa Fire throughout the night. The size of the blaze is holding at 325 acres and containment remains at 10 percent.

Update at 5:45pm: CAL Fire reports that the Appaloosa Fire outside of Angels Camp is now 325 acres and 10% contained. It is situated in the area of Appaloosa Road and Hunter Street.

CAL Fire spokesperson Lindy Schoff tells Clarke Broadcasting, “A threat still remains regarding structures, however, there are no evacuations. We are attempting to open control lines from a current vegetation management project that is in the area. Two citations have been issued as the cause of the fire has been determined to be electrical power. The property owner was doing some work on an electrical panel breaker box and that led to his water supply, which sparked the fire. Both citations are misdemeanors. The first is health and safety code 1301, which is negligently causing a fire. The second is public resources code 4422-B, which is allowing fire to spread onto the lands of another. Both citations have been given to the Calaveras County District Attorney (for prosecution).”

Around 250 firefighters remain assigned to the incident.

The latest estimate remains 250 acres and 5% containment. There are no evacuations in place.

Update at 4:15pm: PG&E reports the number of customers without electricity due to the Appaloosa Fire has dropped to 10,800. PG&E spokesperson JD Guidi reports that it remains unclear when there will be full restoration. The latest size estimate, per CAL Fire, is 250 acres and 5% containment.

A special thanks to our community news partners Kyle Hampton, John Adema, Richard Treadway and Martin Miles for sending in photos. Pictures can be e-mailed to news@clarkebroadcasting.com.

Update at 4 p.m.: Cal Fire reports crews are making progress as the fire is five percent contained. Power continues to be out for 15,000 PG&E customers between Calaveras and San Joaquin counties related to the fire.

Update at 3:30 p.m.: The Appaloosa Fire jumps to 250 acres and is threatening homes. It has caused power outages to 15,000 PG&E customers.  The outage runs between Calaveras and San Joaquin counties including Arnold, Murphys, Angels Camp, Copperopolis, Ripon and Stockton. PG&E crews are heading to the scene, however spokesperson JD Guidi indicates that the electricity was shut off due to a request from Cal Fire and until the company gets the all clear there is no estimated time of repair.

Additionally, the CHP has closed several roads in the fire area including Appaloosa Road north of Hunter Street and Stallion Way and Roan Road at Highway 4. However, traffic is still moving freely on the highway.

Update at 2:15 p.m.: Columbia air resources including air attack and one tanker have been called to the scene at the intersection of Appaloosa Road and Hunter Street south of Highway 4. Also, motorists will want to take precautions as the CHP is currently shutting down roadways in the area including Appaloosa Road.

Additionally, another fire reported initially as a vegetation fire was actually a structure fire, according to Cal Fire. The flames broke out in an outbuilding north of Highway 4 along Tapadero Street and Latigo Street off Pool Station Road. Cal Fire reports that blaze has been contained and crews are mopping up.

One is between Angels Camp and Copperopolis in the area of New Melones. Cal Fire says the flames were reported at the intersection of Appaloosa Road and Hunter Street south of Highway 4.

Additionally, there is another vegetation fire reported nearby to the north of Highway 4 along Tapadero Street and Latigo Street off Pool Station Road. There is no word on the size of the blazes, rate of spread, or whether any structures are threatened. We will bring you more details as soon as they come into the news center.

A special thanks to our community news partner Kyle Hampton and Martin Miles for sending in the photo.