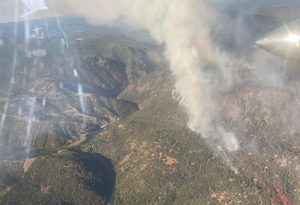 Update at 10:45am: The Rices Fire has grown to 768 acres. There is still no containment, according to the incident command team.

Original story posted at 6:16am: Nevada County, CA — One of the first major wildfire incidents in the Northern California region this summer season erupted yesterday and forced evacuations as it threatened about 500 homes and other buildings.

The Rices Fire ignited at around 2 p.m. near the Yuba River in Nevada County and had spread to at least 510 acres by nightfall.

CAL Fire spokesperson Brian Estes indicates that this incident somewhat signifies the start of the severe wildfire season, adding, “While we may be one of the fewer larger fires in the region right now, I think we are going to see a trend for Northern California to start to see more large fires. And, we have a long summer ahead of us. So, getting good solid containment on this fire, and not having an issue that is going to run into July, is the number one concern.”

Many local fire resources, including strike teams, from the Mother Lode region are being sent to Nevada County to help contain the incident.