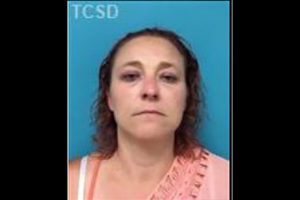 Standard, CA – A man and woman who were stopped for a tampered license plate ended up handcuffed for a local store burglary.

While patrolling in the Standard area recently, a Tuolumne Sheriff’s Deputy noticed the license plate of a Chrysler 300 had been altered with a black marker and pulled it over only to find more than just the occupants inside. A record check of the driver, 34-year-old Amanda Buker, showed she had a misdemeanor warrant, and her driver’s license was suspended. The correct license plate number also revealed the registration was suspended and expired.

While making those checks, the deputy also noticed a dispatch regarding a male and female in a Chrysler 300 suspected of stealing items, like tools, from the Sonora Lowe’s store. The deputy ordered Buker and her passenger, 29-year-old Rafe Ramsey, out of the car. A search of the pair found Ramsey had drug paraphernalia in his pocket. A subsequent pat-down of him discovered he had a felony warrant for his arrest.

The deputy then searched the sedan and found an estimated $1457.69 worth of tools from Lowe’s and nearly $1000 in new clothing with tags from TJ Maxx and Kohl’s. Further investigation, including assistance from Sonora Police, confirmed the couple was responsible for the theft at Lowes. Sheriff’s officials also determined that Buker and Ramsey worked as a team to commit theft and re-sell the stolen items for profit.

The pair was arrested without incident for burglary and shoplifting.