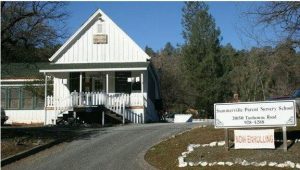 Tuolumne, CA – Wisps of doubt were dispersed this week over the future of one of the Mother Lode’s longest-standing early childhood education programs in the face of charting a new path ahead for itself.

Wednesday, the Summerville Union High School District Board of Trustees unanimously voted to approve a new memo of understanding (MOU) guiding the district’s new relationship with the Summerville Parent Nursery School (SPNS). In operation since 1969 the early education program continues to be credited with providing a strong start for “a good crop” of many former students who now live, work and positively contribute to the community.

As previously reported here, the district has been in a mode of gradually phasing out its funding for the co-op, largely parent-operated school program, due to changes at the state level and in its own Adult Education efforts. As indicated here, ahead of Tuesday’s meeting, under the MOU, the district will retain official sponsorship of the program, under which it will maintain certain responsibilities regarding employment, operations and records. SPNS, which participates in some of these accountabilities, must now reimburse the district for costs and expenses involved, as well as provide its own funding to cover the costs of insurance, and leasing the nursery facility.

Diane Doster, who served as the long-time director of the now-defunct Sonora Parent Nursery School, came on board to help guide SPNS through this crucial year. Nursery board co-president Keturah Wilk credits her with providing valuable guidance and helping maintain stability while the nursery school board and parents investigated how best to proceed with restructuring the school as a 501 C3 nonprofit and aligning with state and local educational resources to explore funding opportunities. Wilk says this summer, as Doster will be stepping down, the school district will lead a search for a new director.

Moving Forward Under The MOU

Wilk estimates that SPNS will need to cover about $10,000 more in expenses this next school year. Now that the MOU is approved, plans are to lease the existing facility on Tuolumne Road. She estimates that for parents who also provide volunteer time at the school, the cost will remain $11/day; for drop-offs, the cost will run $17/day.

“We are so excited that our ‘Little School with a Big Heart’ will keep going for years to come,” states Wilk, clearly happy to be through what she calls an “interesting and challenging” nine months, albeit, one in which the parents took advantage of an opportunity to rethink and refocus on the school’s mission. Over the course, she says the parents talked with many educational institutions and worked closely with the State Board of Education. She remarks wryly, “We went through every avenue, we talked about possibly opening a private daycare – if we had done that, it would have been another whole can of worms.” In January, the nursery board re-approached district administrators with what it learned and a proposal to continue under a different partnership and from there the MOU was developed.

As originally modeled, the program’s adult education component has been revitalized; offering parents instruction and resources on early childhood development, education and effective parenting. She says this element will be programmed into the coming school year, providing open-to-the-public classes on some Tuesday nights. “Our parents are passionate about providing a loving, caring environment to teach and train children morals, virtues, development, motivation, community and socialization,” Wilk emphasizes. “We really believe that who they become is a response to their loving caring environment and their relationships they are building now.”

With its new structure now in place, SPNS has scheduled an Open House for May 13 at the nursery during its operating hours, from 8:45 until 11:45 a.m., so parents and children can come and participate as guests, and see how it operates. The program is geared for children 15 months through five years old or going into kindergarten.