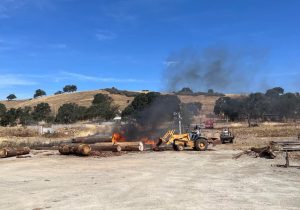 Mop-up is still underway at the Dosa Ranch on Carol Lane in Burson. The Calaveras Consolidated Fire Department reports that the quick work prevented it from spreading and becoming a significant event. A citation was issued by CAL Fire.