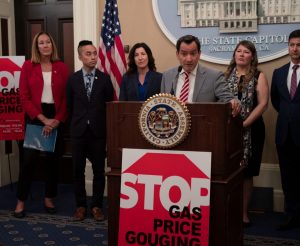 Sacramento, CA — Democrats in the California legislature believe that price gouging by oil companies is a main reason for record-breaking gas prices, while Republicans say it is the high taxes placed on fuel in the state.

Democratic Assembly Speaker Anthony Rendon has announced the creation of a bipartisan committee on gas prices, with plans to question oil companies, economists, and regulators. Rendon notes that California’s gas prices, averaging $6.40 for regular unleaded, are much higher than the national average of $4.98.

Rendon says, “We’ll be asking why gas prices are so high, and looking into solutions to ease the burden.”

Assembly Vice-Chair of the Budget Committee, Republican Vince Fong, countered, “Californians are being crushed at the gas pump and are demanding immediate relief. Instead of suspending the state’s gas tax, Sacramento Democrats are creating a committee? Enough with the political antics, suspend the gas tax now.”