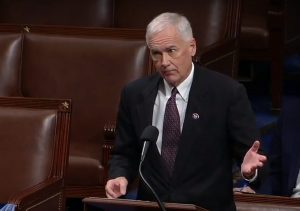 Washington, DC — Mother Lode Republican Congressman Tom McClintock gave a speech on the US House Floor about the logistics of the January 6 committee hearings.

He noted that what happened on January 6 was “an affront to the Constitution and a national disgrace,” and those trying to disrupt the count of electoral votes should be “denounced and prosecuted.”

In addition, he says, “Questions involving the authority of Congress to refuse to count electoral votes, or why adequate security was not present to protect the capitol, or whether there were conspiracies to break into the capitol, are all important to resolve to ensure this never happens again.”

However, he calls what is taking place, “A sick mockery in the principles of fairness and due process that this house is founded upon.”

He said both parties should have been allowed to select their participants, debate the facts, and offer conflicting evidence.

He says House Speaker Nancy Pelosi picked the members from both parties, knowing that they all share a common view. McClintock says it is “impossible to test the accuracy of facts and the truth of the narratives.” He refers to it as a “Soviet-style show trial.”

McClintock also criticizes using the term “insurrection” to describe what happened. Noting, “The constitutional process immediately resumed once these yahoos were kicked out of this building. Do Democrats actually expect us to believe that some lunatic wearing buffalo horns was moments away from seizing our government.  The narrative cannot survive in open debate and the Democrats know it. That’s why they are not permitting one.”

McClintock made the comments on the House Floor, yesterday.