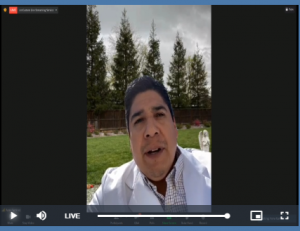 San Andreas, CA — In a complex move, the Calaveras Board of Supervisors renewed the contract with its county health officer, but also made it clear that they hope to replace him soon.

On this week’s agenda was the renewal of Dr. Rene Ramirez’s contract, effective July 1st through June 30 of 2023. It is not to exceed $166,400. The county is required by the state to have a public health officer, and Dr. Ramirez, who is based in Fresno, has been serving in the role over the past year.

Before voting on the contract, Supervisor Benjamin Stopper said he would like the county to find “someone who is a little more in touch with our constituents within our county and understands how business is run here, and how to treat people properly.”

Supervisor Merita Callaway countered by stating she has had no problems with Dr. Ramirez, and reminded the board it was very difficult to find someone to fill the role after Dr. Dean Kelaita resigned from the position. She said there was no one within the tri-county area interested in the position, at that time.

Supervisor Stopper said when they recruited for the position earlier (following Dr. Kelaita), “things were very controversial” (in reference to COVID restrictions) and it was an intelligent move “politically” not to accept it.

Stopper recommended that they reach out to local health leader, Dr. Randy Smart, to see if he would be willing to take on the position. If he declines, Stopper said the county could then request other applicants.

Supervisor Jack Garamendi voiced displeasure that the board was reviewing Dr. Ramirez’s contract just two weeks before it expires.  “We got put into a box, and I don’t appreciate that,” he relayed to county staff.

Cori Allen, Calaveras Health and Human Services Agency Director, defended Dr. Ramirez, and stated that he has been faced with the “greatest challenge we could have envisioned” over the past year. She argued that he has “met every element of the scope of work” listed in his contract. She also stated that he did try to return the call that was referenced by Supervisor Tofanelli and that he possibly got an incorrect voicemail. She also stated Dr. Ramirez was concerned about a possible Brown Act Violation, related to that incident, so he didn’t pursue conversations with Tofanelli any further than the initial attempt to call him back. She also said that Dr. Ramirez “is a health officer” and “not a politician,” to which Supervisor Tofanelli interrupted, “He should stay out of politics then. That’s my comment. And he didn’t.”

The county’s legal counsel confirmed that even if the county approves a one-year extension, either side can end it by giving just 30 days’ notice.

In the end, in a complicated move, the board voted to approve the new contract, but also have two supervisors reach out to Dr. Randy Smart to see if he might be interested in the position. If he is not interested, the board will then do a request for proposals for other potential interested people who would like to fill the role. The end vote was 5-0.

Dr. Ramirez was not at the board meeting.