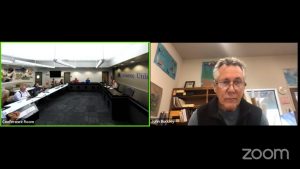 Sonora, CA — By a 5-0 vote, the Tuolumne Utilities District board officially scrapped plans to raise water rates in September.

The $4.5-million additional money that was to be raised annually was going to help acquire and maintain infrastructure that TUD was planning to receive from PG&E, including Pinecrest and Lyons reservoirs. PG&E, however, announced earlier this month that it wants to reassess things, and has suspended negotiations until at least the end of 2023.

In light of the decision, there was a related side debate. Former TUD General Manager and District Engineer Tom Scesa came up during the public comment period and encouraged district officials to “continue on the path” to acquiring water rights. He was upset about some of the dialogue in the community following the PG&E decision, specifically referencing the Central Sierra Environmental Resource Center (CSERC), who he said has been trying to prevent TUD from supplying additional water to customers.

The backstory is that Executive Director John Buckley has cited an agreement from 1983 that was brought up by former PG&E manager Dave Sweitzer at a recent TUD meeting. Schweitzer noted that TUD has water diversion rights from Sullivan Creek, Curtis Creek, and Mormon Creek. Buckley referenced Sweitzer’s report in statements last week to the media, including Clarke Broadcasting,

Buckley argued, “Now that new information has recently been discovered that shows that TUD and the County actually do have water rights that were granted by PG&E in a 1983 purchase agreement, there is even less of a reason for TUD ratepayers to be forced to pay for the takeover of money-losing PG&E facilities.  A lengthy pause in any further purchase negotiations makes good sense.”

Scesa referred to Buckley’s statements as “an illusion,” adding, “I want to make it clear, from my perspective, having worked here as long as I have (17 years), that there are no secret water rights, or newly discovered information that impacts the district’s ability to provide water to its customers.”

Scesa went onto say, “If you look at those water rights (Sullivan, Mormon and Curtis creeks), they have something in common. They are not available when you need it.  In late winter and into the spring, there is natural water flowing into those creeks. However, from an operational point of view, the water is not useful. It has many positive environmental uses, but not from a water consumptive point of view.”

CSERC Director Buckley followed Scesa during today’s public comments and argued that it was inaccurate to say that CSERC has worked to stop TUD from getting water to customers. He also said his group has worked to acquire grants for TUD.

TUD officials have indicated that they will continue to work towards acquiring water rights, and infrastructure, despite the current pause in negotiations, but the ball is currently in PG&E’s court.