Prior Dispute Escalates Into Criminal Threats And Vandalism Arrest 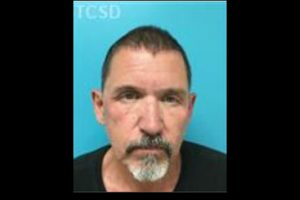 Sonora, CA – Angered over a recent dispute, a Sonora man ended up in handcuffs after pushing a disabled person and threatening another victim.

Tuolumne Sheriff’s Deputies responded to the 14600 block of Mono Way near Hess Avenue in East Sonora last week for a report of a disturbance between 56-year-old Darryl Tacke and another man. During questioning, deputies learned that Tacke allegedly pushed a disabled victim out of the way while entering the home, causing them to fall into a wall.

Victims also relayed that Tacke proceeded to hit walls and yell threats at the other person involved in the dispute, according to Sheriff’s spokesperson Ashley Boujikian. She added, “Victims reported Tacke went outside where he threw items, damaging a statue and planter box and continued to make threats.”

Tacke was taken into custody without incident for making criminal threats, vandalism and abuse of a dependent adult. His bail was set at $10,000.