Calaveras County Man Lucky To Be Alive After BBQ Explosion 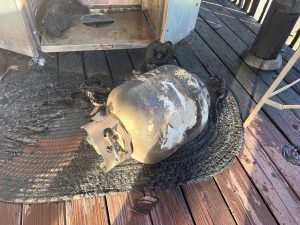 Wallace, CA – A Calaveras County man suffered burns on the upper half of his body after a BBQ explosion that also scorched the grill, deck, and house siding.

The explosion occurred at around 6:30 p.m. at the Camanche Lake Storage facility on Camanche Parkway South, off Highway 12 in Wallace. A report of a commercial building fire and propane explosion near the post office sent Calaveras Consolidated Firefighters, Clements Fire, San Andreas Fire, and CalFire rushing to the scene.

The explosion rocked the storage office that had been converted into a residence. Fire officials detailed that while a male resident was using the barbeque, he noticed flames shooting out of the lower compartment. They added, “When he tried to move the propane cylinder, a vapor/flash explosion occurred. The adult male suffered first-degree burns on his upper body and was able to extinguish the fire before the firefighters’ arrival.”

The pictures in the image box show the extent of the damage from the flames, including burnt leaves on a tree several feet away in the yard. Firefighters also checked the area to make sure there was no fire extension inside the home. They noted, “Needless to say, the homeowner is fortunate to be alive.”