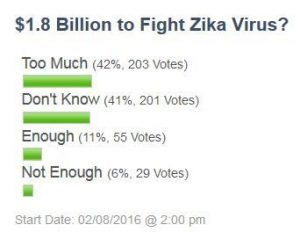 A recent myMotherlode.com poll referenced a request from the Obama administration for $1.8 billion to fund efforts to limit the spread of the Zika virus. The virus is primarily spread by mosquitoes and has recently been linked to birth defects, specifically microcephaly the medical term for a child born with an abnormally small head. Fourty-two percent of the votes on our informal poll said $1.8 billion was too much, 41 percent didn’t know, 11 percent thought it was enough and 6 percent said it is not enough.

The Obama administration notes it has been “aggressively working to combat Zika since late last year.” The virus is now in 26 countries and territories in the Americas, including Puerto Rico, according to the Pan American Health Organization. Zika has not been transmitted by mosquitoes within the continental United States yet, but 50 Americans returned to the continental U.S. with confirmed infections between December 2015 and February 5, 2016. The requested emergency congressional funding would go to both domestic and international efforts as detailed below:

In brief the $1.8 billion is requested immediately as the peak mosquito season approaches. The Obama administration says the funds are to “build on our ongoing preparedness efforts and will support essential strategies to combat this virus, such as rapidly expanding mosquito control programs; accelerating vaccine research and diagnostic development; enabling the testing and procurement of vaccines and diagnostics; educating health care providers, pregnant women and their partners; improving epidemiology and expanding laboratory and diagnostic testing capacity; improving health services and support for low-income pregnant women, and enhancing the ability of Zika-affected countries to better combat mosquitoes and control transmission.”

For more information on the Zika virus and CDC guidance about how Americans can protect themselves, visit http://www.cdc.gov/zika/.