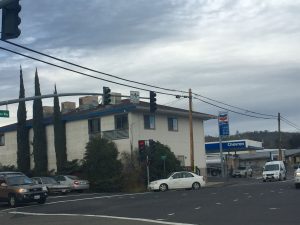 Corner Gas at the intersection of Greenley Road and Mono Way

Sonora, CA — The City of Sonora is receiving criticism over how long it is taking to purchase the Corner Gas Station property at the intersection of Mono Way and Greenley Road.

The property is needed in order to widen the busy intersection, notably in anticipation of Sonora Regional Medical Center’s construction of its 64,000 sq. ft. Outpatient Pavilion (cancer center). Ken Keagy, President of Corner Gas, has written a pointed letter addressed to City Administrator Tim Miller questioning whether the city is serious about buying his property. The letter was also cc’d to members of the City Council and Tuolumne County Administrator Craig Pedro.

During a meeting this past August, Keagy says he was led to believe by Miller that an offer for the property would come by the beginning of September. The two sides were also going to sit down and review appraisals that were conducted in 2014 and 2015. However, Keagy says no offer came, and he received no appraisals.

In October Miller and Keagy had another conversation where it was noted that the City of Sonora had a new “acquisition agent” and Keagy would be contacted in the immediate future to begin negotiations for the purchase of the property.

Keagy says he next heard from the city three months later, on January 19, and a meeting was held the following day. He says he expected to engage in a “negotiation,” but was only told that the city was still interested in purchasing the property. Miller asked that Condor Earth Technologies be allowed to perform an environmental site investigation of the property, but Keagy said he would not agree until a negotiated agreement was in place for the property. Keagy says the city could simply place in the purchase agreement that the property be delivered free from contamination, or that an Underground Storage Tank Cleanup Fund accept his application to clean the property (if there is contamination).

Keagy’s letter, expressing frustration, is dated January 26. It adds that the city’s lack of action is severely damaging his business. When reached by telephone, Keagy told Clarke Broadcasting that he feels the city is dragging its feet, and it is in turn making it difficult to retain and hire employees because there is so much uncertainty.

Sonora Regional Medical Center held a groundbreaking for its new Cancer Center this past July, and the project moved forward with the understanding that Greenley Road would be widened, and the city would be acquiring Keagy’s property. SRMC President and CEO Andrew Jahn says, “We haven’t put our project on hold, as of yet, and the main reason is because we have been working in good faith with the city with the understanding that they are still moving forward with their commitment to have the improvements to the intersection done in conjunction with the completion of our project in the spring of 2017. I met yesterday with Mr. Miller from the city, and he again committed to that timeline, and the city’s goal is to have the intersection completed, and the improvements done to the intersection, in conjunction with the opening. But, our timelines are going to collide if there is not movement forward with the acquisition of the intersection.”

Hypothetically, if the gas station is still in operation when the Outpatient Pavilion construction is completed, Jahn says there is potential that the occupancy at the new facility could be limited.

When contacted this morning, City Administrator Tim Miller said he knew of Keagy’s letter, but had not read it yet. He said he is declining to comment on property negotiations, and length of time it is taking, because he considers them to be confidential. The lone comment he would make is, “There are two sides to every story.”

The City of Sonora is the lead agency on the planned Greenley Road widening, and funding will also come from Tuolumne County.