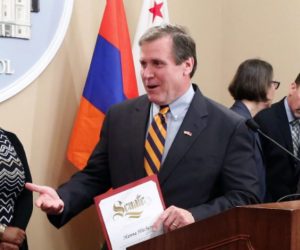 Sacramento, CA — California Governor Gavin Newsom will unveil a revised budget proposal on Friday, and Republicans in the state legislature are detailing what they would like to see as priorities.

Senate Republican Leader Scott Wilk has put out a list on behalf of the Republican Caucus. Wilk says, “The budget should be laser-focused on addressing affordability, rising homelessness, public safety, and an environmental crisis with regard to drought and wildfire that threatens entire communities. These are the issues that keep ordinary Californians up at night.”

The GOP budget priorities, detailed by Senator Wilk, are below:

Gas Tax Holiday. While the Governor proposed in January to freeze the scheduled annual inflationary increase to the gas tax for this year, other state leaders have repeatedly refused to support that modest idea or to approve a broader gas tax holiday, despite several opportunities to do so. As a result, those gas taxes are set to rise yet again in July to 53.9 cents per gallon. This will needlessly harm consumers further, despite the availability of other state funds to pay for transportation projects that are now paid by gas taxes. The state should immediately suspend the gas tax to reduce the cost of fuel for families suffering from record prices. The revenues should be backfilled by the General Fund so that transportation projects will not be impacted.

Lower Costs for Renters. Proposals to increase the renter’s tax credit have received broad bipartisan support, and should be enacted quickly through the budget process. This increase to $1,000 for spouses filing joint returns, heads of households, and surviving spouses and $500 for other individuals would provide temporary assistance for one of California’s most significant problems. Although more fundamental policy reforms are needed outside the budget to truly address the housing crisis in this state, lawmakers should immediately increase the renter’s tax credit to help offset sky-high rents.

Reduce Government-Imposed Debt for Job Creators. The state still faces an $18 billion unemployment debt following the pandemic-related shutdowns. Job creators did not volunteer for this debt, but they will bear the costs of repaying it beginning in 2023. Those costs will make it more difficult to create new jobs in California, which still ranks among the nation’s highest unemployment rates. While we appreciate that the Governor’s January budget proposal recognizes this problem by including $3 billion to pay down this debt, and some legislative Democrats have called for $7.25 billion, we urge that more should be included from the surplus to pay down that debt and clear the path for a more sustainable job recovery.

Address Mental Health and Homelessness Needs. Despite record-spending to address the homelessness crisis in the state, the population has only increased. The recent budget projections continue to show that the state has the resources now to commit to this critical need. In a caucus letter issued on April 18, Senate Republicans called for the state to commit $10 billion to build the facilities needed to help address the related crises of mental health, substance abuse, and homelessness.

Invest in Schools for the Future. The need to build and modernize school facilities has been recognized in recent years by voters and legislators across the spectrum. While some have suggested more state borrowing for this purpose, there is no need to incur debt for these projects at a time when the state has funds available and rampant inflation has driven interest rates higher, which would increase borrowing costs significantly. Senate Republicans believe the state should set aside $10 billion of funds from its surplus now to make these key investments.

Prepare for Long-Term Droughts. Earlier this year Senate Republicans called for significant investments in water infrastructure to prepare California for long-term droughts. We argued that surplus funds should be used to build the Sites Reservoir and repair water conveyance in critical areas of the state to provide water storage for 1.5 million homes per year and promote much-needed water access for California’s food producers. Senate Republicans renew our request for an investment of $3.3 billion in water infrastructure to be allocated as follows: $2.6 billion to fully fund the already voter-approved Sites Reservoir and $685 million for the repair of the Friant-Kern/Delta-Mendota Canals and the San Luis Field/San Joaquin Divisions of the California Aqueduct.

Better Wildfire Prevention. Last year the state began to take wildfire prevention more seriously and raised its investment to $1.5 billion, after decades of neglect and constant calls from Senate Republicans to increase funding for this purpose. However, we were dismayed to learn that this administration’s much-touted program to fast-track environmental reviews for wildfire prevention, the California Vegetation Treatment Program, hasn’t led to the completion of a single project as of the April 12, 2022, even though projections from CAL FIRE anticipated that 45,000 acres would be treated in the first year. Better wildfire policies improve residents’ safety as well as air quality. Avoiding major wildfires would do more to reduce greenhouse gas emissions than many of the majority party’s mandates and restrictions. Fire prevention efforts can include improving vegetation management and making at-risk homes more resistant to flames. Senate Republicans renew our calls for continuous significant funding and for removal of bureaucratic roadblocks stalling wildfire prevention and treatment projects.