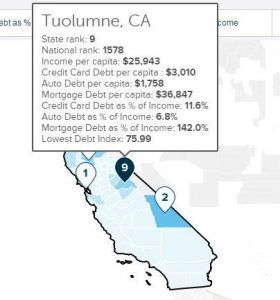 The rankings, recently released by New York based SmartAsset, a financial technology firm, rated counties across the country. The goal of the study was to find the places where people have the least amount of debt. Counties were analyzed by the amount of debt residents held in three categories: credit cards, auto, and mortgage, compared to local income. Then those figures were calculated to a per capita debt-to-income ratio for each of the categories for every county, which created a Debt Index.

In California, San Francisco seized the top spot with the lowest debt index score in the state, but ranked 555 among counties across the country. Tuolumne County took the ninth spot in the state and landed a 1,578 national rating.