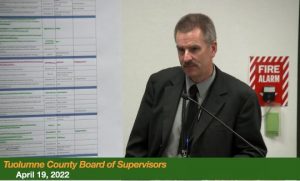 Sonora, CA — Dr. Eric Sergienko, Tuolumne County’s Interim Health Officer who led the public health response over the past two years, was honored at yesterday’s board of supervisors meeting.

With the hiring of Dr. Kimberly Freeman, Dr. Sergienko will now transition back to being just Mariposa County’s full-time Health Officer.

Health and Human Services Director for Tuolumne County, Rebecca Espino stated, “Dr. Sergienko, thank you for consistently serving as a role model to all of us who serve the public. You truly are an inspiration and we will forever be grateful.”

Other county staff, and the individual board members, also praised Dr. Sergienko for leading public health during one of the most turbulent times in the county, and nation’s, history.

Dr. Sergienko later addressed the board, stating, “I’ll start by quoting Jerry Garcia. ‘It has been a long, strange, trip,’” to which he received laughs from the audience. He went on to thank various people for their help along the way.

It was noted that Dr. Sergienko is a retired Captain in the Navy and a firefighter as well.

Dr. Sergienko stepped in at the start of the pandemic (March of 2020) after former Health Officer, Dr. Robert Bernstein, was dismissed by the county. Several months later Dr. Liza Ortiz served in the interim role for a short period, and Dr. Sergienko returned again after her departure.

Praising his willingness to rise to the occasion, Supervisors Anaiah Kirk and Jaron Brandon both noted that he, “Jumped into a burning ship, and decided to go for a ride.”

It was noted that Dr. Sergienko also helped develop the Yosemite Area Gateway Coordination Team, which was recognized by the state, for its efforts to respond regionally to the pandemic.

Dr. Freeman is taking over as Tuolumne County’s Public Health Officer this week.