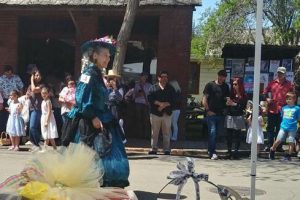 Columbia, CA – Families came out in droves to the annual Columbia Victorian Easter Celebration this past Sunday, with organizers calling it one of the largest crowds in the event’s history.

The warm temperatures helped to bring out many in Victorian attire, with plenty of Easter bonnets on display. District Five Supervisor Jaron Brandon even got in on the act and donned the Mr. Thaddeus Hare costume. He and Mrs. Hare helped the 20 entries in the parade show off their Sunday best. Some came from as far away as Penn Valley in Nevada County to participate. There were old fire engines, dogs, and a stagecoach, with many jumping in for a ride. There were 22 categories, with prizes handed out to each one and listed at the bottom.

Hosted by the Chamber of Commerce, eggs were hidden all over the fields around Columbia State Historic Park. Kids ages 3 to 12 race to find as many of the hidden treasures as possible and put them in their Easter baskets.

Parents also had a chance to get their own baskets filled with goodies like candles and soap, Mark Twain books, and a fire pit with all the fixings for smores. That basket was won by a family from Brentwood, and the video in the image box showed their excitement when their raffle ticket was read off.

Below is the list of parade winners who all received certificates: