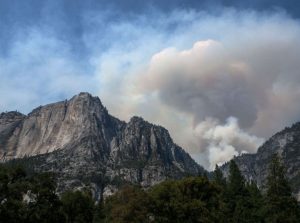 Smoke from the “Tenaya Fire”, which is located in Indian Canyon along both sides of the Lehamite Creek Trail from the north rim of the Valley to Tioga Road, can be seen throughout the park. Park spokesperson Scott Gediman believes the fire may have been human caused, “We have not had any lightening, so we do not think it was naturally caused. The cause remains under investigation.”

The fire is being aggressively fought, according to Gediman, who adds a full suppression effort has been deployed to battle the blaze including nearly 60 firefighters, six air tankers, and three helicopters with additional resources to arrive tomorrow.

The flames have closed trails on the north rim of Yosemite Valley south of the Tioga Road and east of Yosemite Creek.

No structures are threatened. Gediman reports there is no containment at this time.