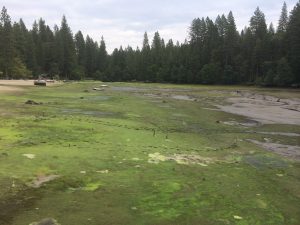 The issue was discussed at this week’s T.U.D. Board of Directors meeting. The lake has been dry since early August when a leak at the dam resulted in it being drained to the mud. The T.U.D. Board sent a letter to the Twain Harte Lake Association in late March, stating that it currently does not have the extra 130 acre ft. necessary to fill the lake. Twain Harte Lake Association Board President Lynn Crook told the T.U.D. Board this week that the amount needed is actually only 90 acre ft., and the 130 estimate was based on old numbers.

Crook stated, “Our summer did come to an abrupt end on August 3rd, and our local chamber of commerce reports that since the lake closed, retail activity dropped 30%. Cabin rentals are down 50-70%,  some employees have lost their jobs,  and at least one business that we know of has closed its doors. Overall business activity has dropped 30%.”

Longtime resident Jim Johnson, who is on the Twain Harte Community Services District Board of Directors added, “The lake is the economy of Twain Harte. In the summer, our population swells by about three times. Those people are all coming to the lake, and if they don’t come, they’re not going to spend any money.”

Following yesterday’s T.U.D. meeting, Clarke Broadcasting reached out to some of the businesses in Twain Harte for more reaction to the thought of not having the lake filled. While its tough news to swallow, many are trying to stay optimistic.

According to Mike Stone, Twain Harte Pharmacy general manager, the store is still preparing for the recreation season, even while bracing for the bad news that there may not be water. “We’re still waiting to hear and we don’t want to throw the baby out with the bath water, so to speak,” he explains. “It’s amazing how many people asked last summer, ‘what do you do if the lake’s closed’? Are you kidding? You’re in the Sierra Foothills!”

That said, so many of Twain Harte’s current annual visitors are used to centering their vacation around lake-related activities, and Stone fully expects significant impacts to local businesses.

Kimberly Darr is owner of Twain Harte Rentals. She shares that, “We’re actually receiving cancellation calls. People are specifically calling because the news has specifically trickled down to them that there’s a good chance that the lake will not be open this summer, and have cancelled their reservations because it was centered around coming to Twain Harte, going to the lake every day and hanging out.”

When you look at the blows from lost income that Twain Harte has taken, Darr says, the limited ski season the last two years, impacts from the Rim Fire, and now, more water issues with Twain Harte Lake, “Twain Harte’s been pretty battered,” she states.

Tough times call for creative measures though. Darr says, “We’re kicking a marketing campaign into gear and we’re just going to have to work really hard to reach people who don’t really even know Twain Harte has a lake and attract them to the area for other reasons. Obviously, we’ll just have to really step our game up, and we’ll do it, but it’s going to be some work, that’s for sure.”

The T.U.D. Board of Directors will continue to discuss water supply and the potential for supplying supplemental water for the lake at upcoming meetings. General Manager Tom Scesa told the T.U.D. Board this week, “Your decisions are going to become quite weighted, as things go along (during the drought), and I think this is one of the first ones you have to deal with.”

T.U.D. had earlier planned to sell water to fill the lake, but it was based on the assumption that Lyons Reservoir would fill to capacity. It is no longer projected to “fill and spill” due to the lingering drought.

Scesa noted at the meeting that T.U.D. is also awaiting word back from the State Water Board about a ruling in 1977 that prevented the filling of a private lake in Orange County. The State Board claimed it was unreasonable and unconstitutional to fill that private lake during the drought. T.U.D. is still hoping to hear a determination about whether Twain Harte Lake potentially falls into that same category.

The Twain Harte Lake Association has argued that besides the economic benefits, the lake provides a needed water source in the event of a fire threatening the Twain Harte community.