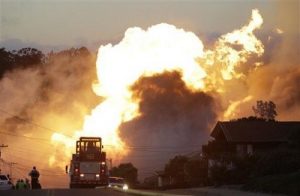 The California Public Utilities Commission has voted to penalize PG&E $1.6 billion for the 2010 San Bruno natural gas pipeline explosion that killed eight people.  CPUC President Michael Picker says, “PG&E failed to uphold the public’s trust.  The CPUC failed to keep vigilant,” said President Picker.  “Our decision commits a significant portion of the shareholder-funded penalty – one of the biggest utility sanctions in U.S. history – to making PG&E’s gas transmission system as safe as possible for the public, consumers, utility workers, and the environment.”

Here is the commission’s breakdown what PG&E will pay:

The decision requires that shareholders and not PG&E customers pay the penalty.  To view the decision in its entirety click here.