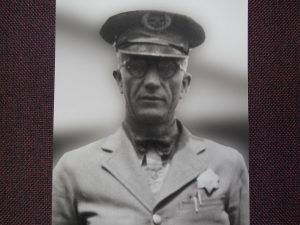 Sonora, CA – Results of a public call for past photos of Chiefs has officials in the Sonora Police Department smiling.

As reported earlier this month, the department called for the public’s help to find pictures of former Chiefs to mount along a wall inside the station in recognition and honor of them. Surprisingly, Police Chief Mark Stinson says the department has received numerous calls. “The two chiefs’ [photos] we received are actually the older chiefs…which we felt would be extremely challenging — if not impossible — to get photographs of these chiefs…we’re very happy and pleased.”

The quest has turned up more than just images.  From the Marquette family came a picture of Chief William Johnson, who served from 1928-1934 and was the first to officially serve as Chief after the California State Legislator changed the job title from Town Marshall. The family also donated his Chief’s hat with its leather rain cover, a real find, according to Stinson.  A second photo, of Chief Charles Hale, who served from 1934-1939, came from his great-nephew Leon Craves.  The search continues for additional photos of the Chiefs listed below:

If you have photographs or information, contact the Sonora Police Department at 532-8141.