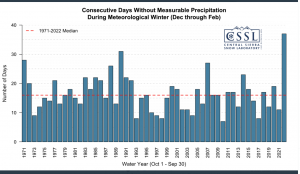 Sonora, CA — It was not just abnormally dry in January and February across the Sierra Nevada, it was record-breaking.

The UC Berkeley Central Sierra Snow Lab reports that the Sierra Nevada went 37 days without any precipitation, the longest ever during the meteorological winter period, which stretches from December through February.

The previous record was 31 days in 1990. The recent record-breaking stretch ended on February 15 when about an inch and a half of snow arrived in many higher elevations.

Forest officials are concerned about the lack of rain and snow. Benjamin Cossel, Stanislaus National Forest Spokesperson, says, “It means that trees that are already drought-stressed will become even more drought-stressed, and they become more prone to infestation by things like bark beetles, which we already have problems with here in Northern California.”

He goes on to add, “Another thing that we are concerned about is what the fuel loads look like on the forest itself, and what that kind of portends for the upcoming fire year.”

Cossell says the Forest Service has been proactively doing things like mastication work to thin forests and remove fuels, and prescribed burns to remove piles.

Thankfully more precipitation is in the forecast this week. Click here to view a story about advisories from the National Weather Service.

Tracey Petersen contributed to this story