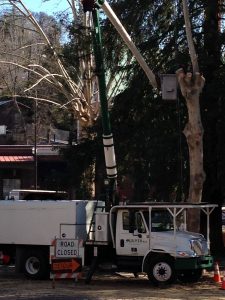 Sonora, CA – Additional tree trimming costs, which include an arborist on site, and added amenities have caused the Courthouse Park Project in Sonora to go over budget by $23,000 dollars.

As previously reported, in January, the Tuolumne County Board of Supervisors approved Grover Tree Service of Modesto to remove seven of the 18 trees, and prune several others in the park for safety reasons.  At this week’s meeting, County Administrator Craig Pedro handed out a revised budget with the additional costs saying, “Because of the actual tree work, that really has the effect of increasing what we’re going to spend on the park from $43,000 to $66,000.”

Pedro adds that hike includes an additional $4,000 for metal trashcans to replace the old wood ones and $5,000 to lay sod instead of seed in the park, which was not in the original budget.  One concern with the sod, brought by Pedro, was the need for watering, especially with the state’s current drought situation.  However, the issue may be mute, as the arborist reports that the Sequoia in the park is in jeopardy and needs continuous watering as well as some of the other remaining trees, or they could die. Pedro says, “That kind of suggests that maybe that’s the one area that we do make sure it does get watered…since we need to deal with the trees anyway.”  Pedro added that unless he heard otherwise from the board the plan was going to proceed and the sod would be ordered.  The board raised no objection.

The additional cost does not include the $15,000 security camera project, which has its own funding from the Tuolumne County Transportation Council.  The project is expected to be completed on Friday, March 6.  Motorists can expect slow traffic in the area as Jackson Street will be closed off due to the work from 7:30 a.m. until 4:30 p.m.  each day.