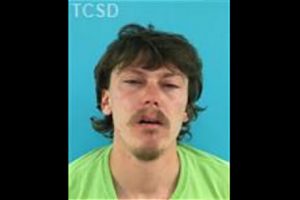 Jamestown, CA – After being arrested for disorderly conduct while drunk, a Jamestown man allegedly head-butted a deputy.

A call regarding an intoxicated man causing a disturbance brought Tuolumne Sheriff’s Deputies to the Preston Lane apartments in Jamestown last Saturday afternoon. The suspect, 25-year-old Dakota Blu Davis, showed signs of intoxication while in a public place, according to sheriff’s officials. A record check revealed Davis also had an outstanding misdemeanor arrest warrant for driving under a suspended license. Subsequently, he was taken into custody for public intoxication and that warrant.

Once in a patrol vehicle and heading towards the jail, sheriff’s officials say, Davis began yelling profanities and also threatened to fight deputies. They added that during booking he continued to be uncooperative and then suddenly head-butted a deputy but was quickly restrained. Besides being arrested for being drunk and disorderly, Davis tacked on felony threatening and resisting a deputy to his charges. His bond was set at $25,000.