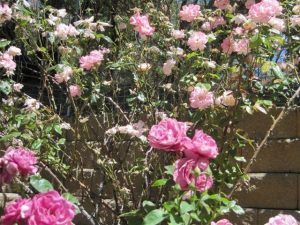 Why prune roses? For several reasons; to improve flower quality, to remove unproductive or diseased branches, to leave a few of the good, strongest canes as the foundation of a healthy bush, to give the plant an attractive shape and keep it the desired size for your landscape and to stimulate renewal growth.

When should they be pruned? Typically, prune before the plant breaks dormancy and after the danger of frost is past. For roses that bloom all summer: At elevations 2000 ft. or less, prune between late winter and early spring. At elevations 2000 ft. or more, prune between early to mid-spring. For roses that bloom only once: prune right after the flowers fade.

Always cut to a strong outside bud. If removing the entire cane cut on the bud union where the cane originated. Cut at an approximately 45 degree angle ¼ inch above the bud or bud-union. If a longer section remains, die-back will occur. Cut the cane with the sharp side of the pruners opposite the bud to assure a clean cut and that the non-cutting side will be pressing against the part of the stem that will be discarded.

There will be a demonstration on rose pruning on open garden day, February 7th, starting at approximately 10:30 am. The Tuolumne Master Gardener Demonstration Garden is open 10 a.m. to 1 p.m. and is located at Cassina High School, 251 S. Barretta Street in Sonora.