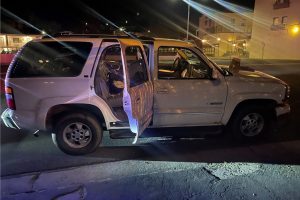 Sonora, CA – Tuolumne Sheriff’s officials report a traffic stop tripped up an alleged Sonora drug dealer who was found to have fentanyl on him.

A Chevy Tahoe traveling along Stockton Street around 11:30 p.m. on Tuesday in Sonora grabbed the attention of a deputy who spotted multiple vehicle code violations. Requesting record checks of the three vehicle’s occupants, the deputy discovered the driver, 55-year-old Janet Weissbeck, had a misdemeanor warrant for her arrest while another passenger was on parole.

A pouch hidden inside a sock of passenger, 59-year-old Richard Garris, turned up four grams of methamphetamine, a small bag containing about three grams of heroin, nearly one gram of fentanyl, and empty bags for packaging, according to sheriff’s spokesperson Ashley Boujikian. Also uncovered were a scale and “text messages and statements from Garris on his cell phone that showed he was in possession of the drugs with the intent to sell them,” detailed Boujikian. Additionally, Weissbeck had meth and 9mm ammunition on her, which as a felon she is not allowed to have.

Garris and Weissbeck were arrested and both placed on $10,000 bail each.