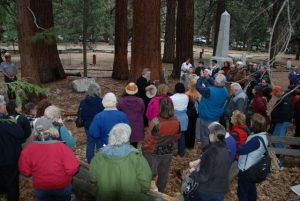 Yosemite, CA — In 2014, visitation to Yosemite eclipsed the four million mark for the first time in three years.

Last year, 4,029,416 people visited Yosemite, compared to 3,829,361 in 2013 and 3,996,017 in 2012. Yosemite Ranger Ashley Mayer says it’s unclear what led to the uptick, but notes there were several popular events surrounding the 150th Anniversary of the Yosemite Grant. She also notes that in 2013 the attendance was negatively impacted by the Rim Fire and federal government shutdown.

August was the busiest month in Yosemite last year, with 677,293 visitors. January was the quietest, with only 116,766 guests.

“This is an incredible place, and we love to share it with as many people as can make the trip out here,” adds Mayer.