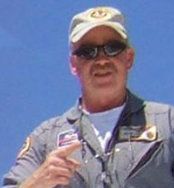 Foresta, CA – Cal Fire has have released the name of the air tanker pilot killed yesterday while battling the Dog Rock Fire near El Portal in western Yosemite National Park.  He is 62-year-old Geoffrey “Craig” Hunt of San Jose.  He was a 13-year veteran pilot of DynCorp International under contract with Cal Fire.

“We continue to mourn the tragic loss of Craig,” said Chief Ken Pimlott, CAL FIRE director.  “We know wildland firefighting is an inherently dangerous job, but Craig made the ultimate sacrifice.”

Hunt’s body was removed from the crash site earlier today with an honor guard present according to Ranger Kari Cobb.

Cobb says, “The reason for the crash is still under investigation.  That is something that will take several weeks to conclude so at this point we still don’t know why the plane crashed.”

The National Transportation Safety Board has taken command of the investigation.