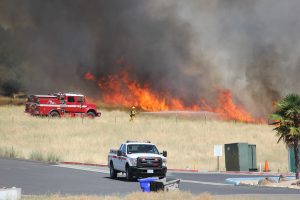 Fire Captain Specialist Brenton Brown says, “The person in the Reed Fire was grinding some bolts and  as he was cutting off the bolt, the heated metal shavings landed in some dry grass and then spread.”

Brown says that man had 45 feet of ground clearance where he was doing the grinding and a water hose, but that just shows how dry it is out there and how far metal shavings can fly. Those involved in igniting the flames could face some legal action, but that will be up to fire investigators.

Brown says, “At minimum some people will probably be seeing bills in relation to the cost of fighting the fires.  Some of the fires did burn across other people’s property and they may be seeing insurance claim bills from other people affected by the fire.”

Those cost could be thousands of dollars according to Brown.