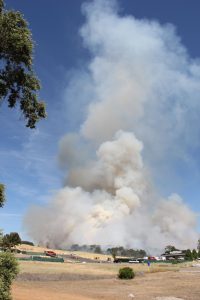 San Andreas, CA — Cal Fire reports the Reed Fire on the southside of San Andreas is 75% contained at 120 acres.

Cal Fire Spokesperson Nancy Longmore says, “There was one confirmed structure destroyed a 20 x 20 foot corral shed.  Other than that crews will remain on scene through Saturday doing mop up.”

Cal Fire reports the flames broke out at around 3:30 Friday afternoon on the 300 block of George Reed Road near Highway 49. 30 homes were threatened and residents were evacuated on Howell Road, Magers Way and the Saddleback Subdivision. Those residents were allowed to return to their homes after about two hours.   A stretch of the Highway 49 was closed for about an hour.

Click here for a map of the evacuation and fire area.

A special thank you to Joel Metzger for sending in photos he took of the fire.