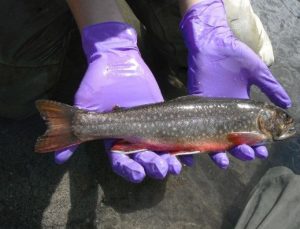 Yosemite, CA — A new study released today found high amounts of mercury in fish caught in remote areas of national parks.  Those parks are in the West and Alaska including Yosemite National Park.

The U.S. Geological Survey and National Park Service conducted the study. More than 1400 fish were collected between 2008-2012 from hard to reach, high elevation lakes and streams in 21 national parks.  Sixteen species were sampled, with a focus on sport fish such as brook trout, rainbow, cutthroat, and lake trout; as well as smaller prey fish eaten by birds and other wildlife. A vast majority of the fish had acceptable levels of mercury according to federal researchers.  However, 4% of the fish gave them cause for alarm. The levels in those fish exceed human consumption and/or wildlife health benchmarks.

Health officials say exposure to high levels of mercury can damage the brain, kidneys and a developing fetus. The park service is coordinating with state officials on potential fish-consumption advisories.