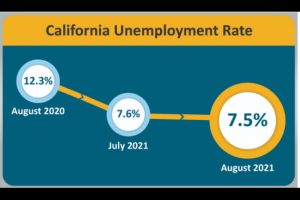 Sonora, CA — California employers are adding new jobs at a record-breaking pace as the state has averaged more than 111,000 new jobs a month since February.

The state’s jobless rate improved from 7.6% in July to 7.5% last month. California’s job recovery rate is about 58% of the 2.7 million jobs lost in March and April of 2020 after Gov. Gavin Newsom issued the nation’s first statewide stay-at-home order because of the coronavirus, according to a report the Employment Development Department released Friday.

Newsom fresh off a thwarted recall attempt touted, “California continues to lead the nation’s economic recovery, creating 44 percent of the nation’s new jobs in August and ranking third in the nation in rate of job growth this year. These 104,300 new jobs, the fifth time this year of six-figure job growth, represent new paychecks for Californians and new employees on payroll for businesses. We still have more work to do in regaining those jobs lost to the pandemic, but this is promising progress for California’s economic recovery.”

In the Mother Lode, the jobless rate also fell with Calaveras County also dipping slightly from 5.7% in July to 5.6% in August. The numbers were better for Tuolumne County, dropping from 7.5% in July to 7.1% last month.

The report detailed that nine of California’s 11 industry sectors gained jobs with the government adding the most at 46,900, as a new school year begins, and public schools reopen. Health services had the largest job reduction at 6,300. It also showed that the number of residents applying for unemployment benefits has increased four weeks in a row with more than 3 million people in the state still receiving some form of unemployment benefits.