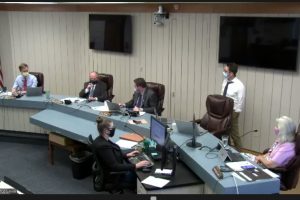 Tuolumne County Board of Supervisors Meeting 9-13-21

Sonora, CA – The Tuolumne County Board of Supervisors has come one step closer to giving the green light to requiring businesses to have a license.

At this week’s meeting, the board gave final direction to county staff about implementing a new business license program. It would allow the county to have a master list of who is conducting business locally. It would only apply to the unincorporated areas of the county.

Tuolumne County Senior Administrative Analyst Liz Peterson reports that the supervisors instructed staff to make it a yearly fee of $32, which would pay for the county’s cost to produce the license for businesses to operate in the county, including agricultural businesses like farmers markets. It would not impact shorter term businesses, which she defined those being “open less than 60 days throughout the duration of the business.”

Licenses would be required for all branches/facilities of a business. Penalties were also included in the supervisors’ recommendations. Peterson stated, “The guidance was that for each year a business does not have a license, it will cost the fee multiplied by the number of years.”

During the discussions District 2 Supervisor and Chair Ryan Campbell surmised, “I think if there really was strong opposition to it, we would have heard that by now. We talked about this in January, and we still haven’t had a huge tidal wave of opposition from the business community.” Smiling he added, “In government usually when you don’t have a lot of opposition that means an endorsement because when things are going good people don’t really say much but it’s just when its going bad that people complain.”

Staff will bring the final ordinance to the board for approval in October, according to Peterson. The city of Sonora has a similar program, so the county’s license is only for those in the unincorporated areas.