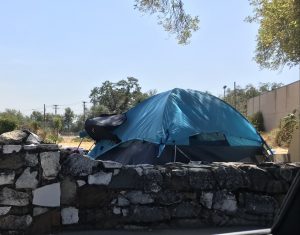 Sonora, CA — Officials with the City of Sonora have been fielding several questions from community members about a homeless camp that has been growing at the intersection of Mono Way and Greenley Road.

Of concern, there was recently a small fire at the site.

The property is owned by Caltrans. Expressing frustration about the situation, City Administrator Mary Rose Rutikanga says, “Our Police Officers do not have jurisdiction to patrol that property, only the CHP because it is state property. Although our officers are trying to do all they can to ensure the safety in and around that area.”

Last week the city had discussions with Caltrans leaders and urged them to prioritize the removal of the camp, due to the recent fire.

Related to the issue of homelessness, the city recently acquired a dilapidated old home at 290 South Stewart Street in hopes of building an emergency shelter there using Community Development Block Grant and Redevelopment funds.

Rutikanga adds, “We had hoped to have a community conversation about this shelter project last month but the Washington Fire impacted our ability to hold that community meeting.  We are tentatively rescheduling that meeting for October 12th.”

She concludes, “We also know that the lack of affordable housing in both the City and County is having a major impact on our community members to find adequate housing. And that is why the City Council recently passed an ordinance restricting the use of Short Term Rentals (Airbnb’s) in the City. The City Council also directed staff to review our City ordinances to ensure that there are no city barriers for the development of affordable housing.”