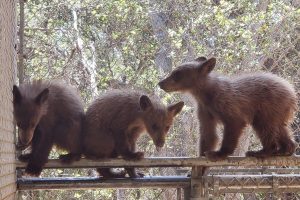 California Department of Fish and Wildlife (CDFW) received reports of the three bears wandering close to people, without their mother. PAWS officials noted that is unusual because bear cubs “naturally remain with their mothers for about two years, learning important survival skills.”

Concerned that the cubs were too young to survive on their own, state wildlife officials decided to capture the cubs. Once rescued, state wildlife officials turned to PAWS for help. The sanctuary agreed to house the bears until they can be transferred to another facility and eventually released back into the wild. PAWS also noted that giving the cubs a temporary home freed up space at a CDFW facility to take in other bears in need, possibly those injured or burned in this year’s disastrous wildfires.

Wanting the little ones to have the best possible chance of survival as wild bears, PAWS says its staff is taking every precaution to keep the cubs from becoming accustomed to humans. To allow for that, the Bob Barker Bear Habitat at ARK 2000 has become their new home. Filled with oak trees and native grasses, it provides a peaceful setting far from most human activity, which is just what they need say PAWS officials.

Unfortunately, the cost of housing the bears is not cheap, and the sanctuary “does not receive any government funding for situations like this, nor for any of the rescues we undertake,” according to sanctuary officials. For that reason, they are now turning to the public, asking for donations to help with the cost for not only the bear cubs, but future animal rescues as well. Click here to donate.