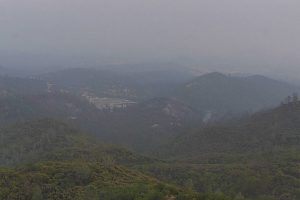 Update at 7:15 p.m.:  here is the final update this evening for the Washington Fire burning in Sonora and Jamestown in Tuolumne County. It has grown to 100 acres. Crews have made progress bringing the containment from 10 to 25% contained this evening. There have been a total of 17 structures destroyed including 3 houses, 5 mobile homes, 5 motorhomes, 2 garages, and 1 commercial building, and 1 outbuilding. A Red Cross Disaster Assistance Center has been set up in Sonora with details below.

CAL Fire spokesperson Emily Kilgore details, “Fire crews conducted direct fire line construction, mop-up, and patrol operations today, that will continue through tonight. Challenges firefighters faced today included, working with limited resources due to several fires in the surrounding area, lack of aircraft support due to smoke, and limited visibility and fatigue as several resources that are assigned to the fire have been actively fighting fire for over 48 hours.”

Additionally, firefighters are working with several utilities to secure damaged infrastructure and mitigate hazardous trees within the fire perimeter. The current resources on scene include 9 engines, 4 hand crews, 3 water tenders, and 2 dozers.

EVACUATION WARNINGS: Remain in place in the surrounding area within a mile of the Evacuation Order zone.

ROAD CLOSURES: Stockton Road is closed between Highway 108 and the Foothills Cafe.

Many thanks to all who sent in images yesterday, they have been uploaded to a photo gallery for the Washington Fire here.

Update at 5:35 p.m.:  More details are coming out regarding the destruction caused by the 81 acre and 10% contained Washington Fire. Tuolumne County Office of Emergency Services (OES) and the City of Sonora just released information that a Disaster Assistance Center in conjunction with the American Red Cross will open tomorrow (Saturday, Aug. 28)  at Sonora Elementary School on 830 Greenley Road from 9 a.m. to 4 p.m. The statement went on to advise:  “Investigators have assessed the damage in the affected areas left by the Washington Fire and have identified a total of 17 destroyed structures: 3 houses, 5 mobile homes, 5 motorhomes, 2 garages, and 1 commercial building, and 1 outbuilding. If you think that your home or property has been affected by the fire, please go to the Disaster Assistance Center to verify locations and receive Red Cross assistance and disaster relief services. The emergency operations public information line can be reached at 209-533-5151. Individuals are asked to bring proof of photo identification and residency (such as tax bill, utility bill, etc) if seeking assistance at the disaster assistance center.”

Update at 4:45 p.m.:  An update on the Washington Fire from Tuolumne County Sheriff’s spokesperson Nicco Sandelin. He details that there are no changes related to evacuations or road closures, which can be viewed below. Sandelin added, “Deputies will remain in the area throughout the night into tomorrow to patrol evacuated zones.” In the morning, conditions will be re-evaluated with an update given around 10 am.

Many thanks to all who sent in images yesterday, they have been uploaded to a photo gallery for the Washington Fire here.

Updates below written by BJ Hansen at 10:05 a.m.: Shortly before 9:30am, CAL Fire put out a joint Washington Fire press release stating that most of the evacuation orders are being downgraded to a warning, except for a stretch of Stockton Road in Sonora. The Tuolumne County Sheriff’s Office reports there was a miscommunication amongst the joint command structure, and the Sheriff’s Office is keeping some additional areas under an evacuation order. They include North Drive, Chabroullian Lane, Golf Links Road (between Highway 108 and Chabroullian), McKibbon Drive, Constance Lane, Mountain Vista Court, Circle Drive, Alley Drive, Golden Dove Lane, Silver Pine Drive, and Southgate Drive (where the pavement ends).

Evacuation Warnings will remain in place in the surrounding area within a mile of the Evacuation Order zone.
Stockton Road will be closed between Highway 108 and the Foothills Cafe. The other areas in downtown Sonora are no longer under an order, and have been downgraded to a warning, with the exception of Stockton Road between Highway 108 and Ponderosa Road.
Deputies will remain in the area to aid with repopulating evacuation areas as needed.

Update at 9:45am: Sonora Police Officer Thomas Brickley is providing an update on the repopulation of areas in the City of Sonora as many evacuation orders have now been downgraded.

He says, “When residents of the city of Sonora return to their homes today they may see yellow police tape on their mailboxes, gates or front doors. That means that an officer went to check last night to make sure no one was at the residence. There is no reason to be alarmed by those markings. We also want to remind people that there are still fire personnel in the area, so drive safely and be mindful of them. Also, remain vigilant of any changes in the fire status.”

More information about the downgraded evacuation orders can be found below:

Update at 9:25am: It is a sign that much success has been made corralling the Washington Fire.

CAL Fire, the Tuolumne County Sheriff’s Office and the City of Sonora report in a joint press release that all evacuation orders due to the fire have been downgraded to a warning with the exception of Stockton Road from the intersection of Highway 108 to the intersection of Ponderosa Road.

The earlier evacuation warnings have been lifted entirely.

Update at 8:08am: The Board Chair of the Tuolumne County Supervisors, Ryan Campbell, who is serving as Director of the Office of Emergency Services, has provided an update to Clarke broadcasting about the Washington Fire.

You can hear the full interview by clicking below.

During the interview, he says, “There were structures damaged, but we don’t have a full accounting of the homes that were burned, or what other kinds of structures were damaged as a result of the fire. Hopefully that will be coming soon. It was a really dangerous situation given the location of the fire and the damage to the electrical grid. There were at least a couple of transmission line poles that were burned and actually came down.”

Update at 6:55am: After surveying the area, CAL Fire reports this morning that the Washington Fire continues to hold at 81 acres. There is now 10-percent containment. All of the earlier evacuation orders and advisories remain in place. Firefighters will continue to work throughout today to strengthen lines around the perimeter. Damage assessment has begun and will continue. Officials note that hotter temperatures are expected today and continuing through the weekend.

Additional school information has been coming into the news center. Click here to find the latest.

Original story posted at 6:05am: Sonora, CA — Officials will be assessing the damage today after a pair of wildfires near Highway 108 merged into one and caused destruction and evacuations near Sonora and Jamestown. They ignited during the one o’clock hour on Thursday afternoon.

As of this morning, the two incidents combined being referred to as the Washington Fire, is 81 acres and five percent contained. The positive news is that officials have a perimeter around it, and it has been staying within it. Tens of thousands lost power yesterday.

The lights have turned back on for many, but others are still without electricity. PG&E has not given an estimated full restoration time. Some areas are still under an evacuation order, including the City of Sonora from W. of Stockton Rd to W of S. Washington St. Including all roads in between. This includes all downtown hotels on Stockton and S Washington. There are also mandatory evacuation orders for Woodside and South Gate drives, and Fairview lane, including all side roads, McKibbin Drive, Golf Links Road, North Drive, Crooked Lane, Silver Pine Road, Alley Drive, Circle Drive and Golden Dove Lane

Lesser, Evacuation Warnings, are in the place for all other areas of the City of Sonora, Panarama Road, Rough and Ready Trail, Gibbs Drive, Jamestown Road and Racetrack Road.

An evacuation center is open at the Tuolumne Memorial Hall. The cause of the fire is still under investigation.

Highway 108 is closed near the fire area.

The fires are also impacting some schools today. Click here for more information.