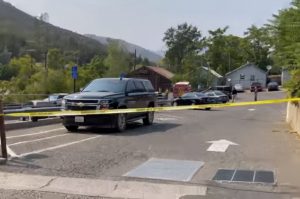 Mariposa, CA — Two schools were placed on a precautionary lockdown while officials chased a shooting suspect in Mariposa County.

The Mariposa County Sheriff’s indicates that Kenny Patterson, identified as being in his early 20’s, allegedly shot someone yesterday afternoon in the parking lot behind the Pizza Factory on 5th Street in Mariposa. He initially fled the scene, and nearby Mariposa High School and Mariposa Elementary School were placed on lockdown status, and everyone was directed to stay in the classrooms. Buses were also held in place.

While specific details have not been released, Patterson was eventually arrested and placed into custody, and the lockdown was lifted.

Mariposa Superintendent of Schools, Jeff Aranguena put out a statement praising the Sheriff’s Office for their collaboration and guidance. Aranguena adds, “It is also notable to mention that while Mariposa County High School and Mariposa Elementary School were under a lockdown/shelter in place, no threat occurred at the school sites and the lockdown/shelter in place protocol was put in place as a precautionary measure.”

He adds, “I would also like to thank our staff, leadership, and principals for their quick action, response and support.  And I would finally like to thank our families and parents who managed to remain calm and allowed the sheriff to do what they needed to do to keep our community safe.”

The Mariposa County Sheriff’s Office is planning to release more details about the shooting incident later today. The victim who was shot was taken to a hospital to treat injuries.