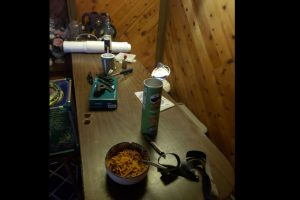 Food and other items found in kitchen

The owners called sheriff’s dispatch last week to report that multiple people were illegally living in their house on Ridge Road in the Jackson area near the Amador County Airport and west of Highway 49. When Deputies arrived, they found that several people had made themselves at “home.” Unfortunately, as the pictures in the image box show, they left a mess for the homeowner to clean up with trash littered all over the home and property.

A search of the home turned up several fraudulent lease documents. The paperwork was linked to two of the squatters,  Jamison Ramiskey of Jackson and Marissa Stallardo of Wilseyville. The two were subsequently arrested for burglary and given a new home at the county jail. Sheriff’s officials did not reveal exactly how many people were living at the house.  They remind always make sure to continually check on a vacation or second home to make sure there are no unwanted guests making it their home.