Driver Arrested After nearly 32 Grams Of Meth Uncovered In Vehicle 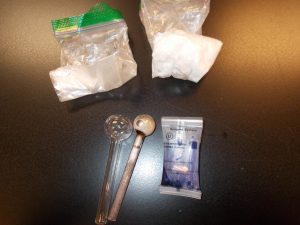 Rail Road Flat, CA – The driver of a vehicle with no registration tag was arrested after nearly 32 grams of meth were uncovered.

A Calaveras County Sheriff’s Deputy spotted the vehicle while patrolling Ridge Road in Rail Road Flat last week and made a traffic stop. Behind the wheel was 44-year-old Earl West from Lodi.  He consented to a search of the vehicle that uncovered a larger Ziploc baggie with what appeared to be methamphetamine inside.  It was hidden in a small camera case. West was taken into custody without incident.

The substance tested positive, on a presumptive test, for methamphetamine. The substance was sent to the California Department of Justice for further analysis and further confirmation.

West was charged with two felony counts of possession of a controlled substance for sale and transport of a drug. His bail was set at $55,000.