Smoke From Two Outside Fires Drifts To Tuolumne And Calaveras 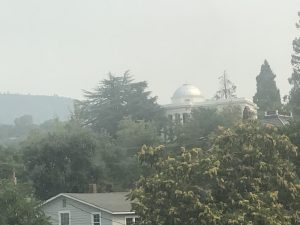 Sonora, CA — The Mother Lode is getting drift smoke from both the Caldor Fire in El Dorado County and the massive Dixie Fire further north.

The Caldor Fire ignited Saturday evening in the Eldorado National Forest. There is no containment on the 754-acre blaze. It is four miles south of Grizzly Flats and two miles east of Omo Ranch. The El Dorado County Sheriff’s Office has issued an evacuation order for the 1.5-mile radius around the fire. 285 firefighters are assigned to the incident. Officials had difficulty getting air resources on the fire yesterday due to the thick smoke and inversion layer.

Meanwhile, the Dixie Fire, burning across Butte, Plumas and Lassen counties, is 569,000 acres and 31-percent contained.

Smoke tracking from the EPA indicates both incidents are responsible for the current smoky conditions in the Mother Lode.