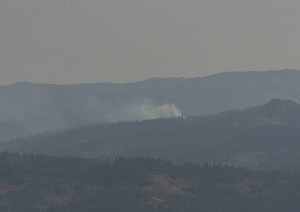 The Bald Fire burning in STF

Update at 12:24 p.m.:  Firefighters are working a blaze dubbed the “Bald Fire’ that was threatening the Bald Mountain Heliport in the Stanislaus National Forest this morning. The flames broke out four miles west of Highway 108, between Long Barn and Strawberry, on the Mi Wok Ranger District. Forest fires officials detail the forward rate of spread was stopped at five acres by aircraft using retardant to “box the fire in.” Resources on scene include 85 personnel, two helicopters, 5 engines, 3 hand crews, two dozers, and 1 water tender. Crews will continue to work toward full containment and mop up this afternoon. What ignited the blaze has not yet been determined

Original post at 10:22 a.m. written by Nic Peterson: Long Barn, CA– A 5-acre vegetation fire is threatening the Bald Mountain Helicopter landing pad on the Stanislaus National Forest. The fire is located west of 108, between Long Barn and Strawberry, on the Mi Wok Ranger District. Air resources have stopped the flames’ forward rate of spread with aircraft using retardent. More information will become available as it comes into the news center.