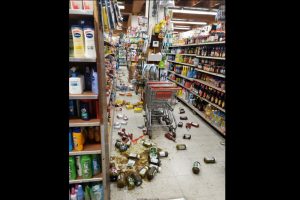 Sonora, CA — Dozens of aftershocks have hit the area between Northern California and Nevada today (Friday, July 9) after yesterday’s magnitude 5.9 earthquake in the Walker/Coleville area, west of Highway 395 in California.

The quake sent large boulders rolling onto that highway shutting it down for several hours. It also knocked smaller items off shelves, including in the Pinecrest area, with produces scattered across the aisle at the Pinecrest General Store, as shown in the image box. California’s emergency operations office relayed reports of minor road damage but no significant impact to infrastructure.

As reported here yesterday, the quake struck before 4 p.m. At the Clarke Broadcasting studios on South Washington Street, it started with the ground rumbling, like a logging truck driving by, and then grew into full-blown shaking of building, lasting around 30 seconds. USGS reports the tremor was felt across California to San Francisco and in Nevada to Las Vegas. It was the largest earthquake to hit the area since a magnitude 6.1 temblor in 1994.

According to the U.S. Geological Survey (USGS) and as the map below shows, aftershocks continue ranging between 2.7 and 3.0 in magnitude and could felt in the Markleeville and Dardanelle areas.