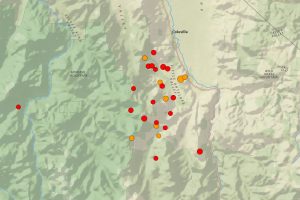 Earthquake in the Walker Coleville area, west of HWY 395 in California

Update at 5:17 p.m.:  The initial reports from the U.S. Geological Survey (USGS) reported that the 5.9 magnitude earthquake was centered in Smith Valley, Nevada. That has been revised to the Walker/Coleville area of California, west of Highway 395, which is closed from that area to the Nevada Stateline due to a rockslide. Further details on the quake and its aftershocks are below.

Original post at 4:20 p.m.: Sonora, CA — An earthquake that lasted more than 30 seconds rocked the Mother Lode this afternoon.

At the Clarke Broadcasting studios on South Washington Street in Sonora, the building began to shake but no items fell off shelves or pictures came crashing down. Then the calls came flooding into the studio with reports of the quake being felt in both Tuolumne and Calaveras counties from Arnold to Columbia, Sonora, Twain Harte, and Groveland.

The Southern California Earthquake Data Center reported it as a 6.2 magnitude initially and then downgraded it to a 5.9. It was centered in Smith Valley, Nevada, located 30 miles southeast of Gardnerville and Minden, Nevada, as shown on the map below it is also near Markleeville. Aftershocks continue ranging between 3.1 to 4.2 in magnitude. Highway 395 is closed in the Walker/Coleville area to the Nevada stateline due to a rockslide caused by the earthquake.