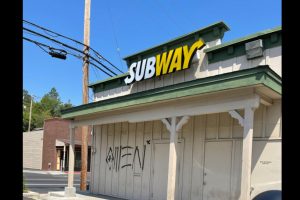 Graffiti tagged on the Subway sandwich shop in downtown Sonora

Sonora, CA – The pictures in the image box show several buildings in downtown Sonora that were hit by vandals.

Sonora Police detailed that sometime overnight, black spray paint was used to tag walls and a garage door at several locations along Washington and Stewart streets. One of the tags was right on the side of the Subway sandwich shop at the corner of Restano Way and South Washington Street.

Additionally, on Monday just after 1 p.m., police dispatch received a report of graffiti scribbled across the front door of the former Bourbon Barrel/Armory bar located at 208 South Green Street, off Stockton Street. It was vandalized with red paint. The image box pictures show that while it had already been removed there were still visible traces of the paint. There is no word on what that writing said.

It is also unclear what the latest graffiti says/means or symbolizes. No suspects are in custody but police relay they are “actively investigating these crimes and need help from the community identifying the person or persons responsible.”  They ask that anyone with information regarding the vandals, call 209-532-8141.