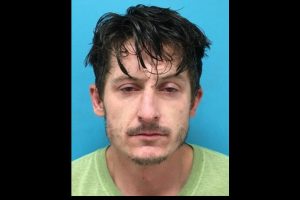 Sonora, CA — A mixture of vacation homes and permanent residences in the Eagle Meadows area of Tuolumne County may have looked like an easy target for a thief who learned otherwise.

Neighbors in that area are on high alert and look out for each other’s homes says sheriff’s spokesperson deputy Nicco Sandelin. Last Thursday, those neighbors sounded the alarm when an unknown man was spotted walking on a property. Deputies responded and found 34-year-old David Schrimp of Santee in the San Diego area.

While questioning Schrimp, deputies learned that his vehicle had become stuck on a property Sandelin says he had burglarized, along with three other homes in the area, totaling four in all. Schrimp was arrested for the thefts without incident and placed on a $50,000 bail.

Of note, Schrimp was also handcuffed two weeks ago by Sonora Police after being caught on security footage trying to break into a vending machine at a local car wash, as detailed here.