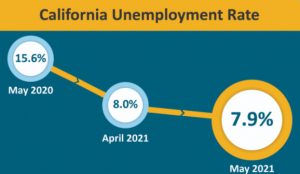 May 2021 unemployment rate for California

Sacramento, CA – As COVID restrictions continued to ease in California the number of those finding jobs climbed – including in the Mother Lode.

California’s unemployment rate dipped slightly to 7.9% from 8% in April as employers added 104,500 new jobs in May. In Friday’s Employment Development Department (EDD) report, it showed the state regained 1.4 million jobs of the 2.7 million lost at the start of the coronavirus pandemic. The downward trend is being driven by restaurant and hotel hirings as California reopens its economy. Touting those numbers, Gov. Gavin Newsom exclaimed, “We’ve regained more than half the jobs we lost over the past year, but there’s still a long way to go – that’s why we’re making historic investments in small business tax cuts and grants, tax rebates for two-thirds of California families and rent relief for those hardest hit by the pandemic.”

The Mother Lode saw better results than the state. Tuolumne County’s jobless rate decline continued from 7.8% in April to 6.9% last month, almost a full point. Calaveras saw a drop from 5.9% to 5.4% in May.

A total of nine of 11 industry sectors added jobs in May. A third (62,300) of the job gains came from the leisure and hospitality industry. Construction saw a decline of 1,600 jobs. State officials on Thursday announced they would no longer give unemployment benefits to people who are not actively looking for work, starting on July 11. California had suspended that requirement during the pandemic. There remain about 2 million people still receiving unemployment benefits.

Nationwide, the state has accounted for 23% of all job growth since February. The U.S. unemployment rate is currently 5.8 percent, a 0.3 percentage point decline from April, according to the U.S. Bureau of Labor Statistics.