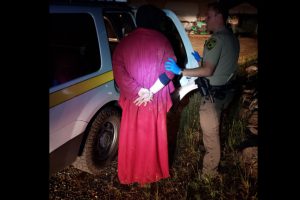 Amador County, CA — An elderly Amador County disabled man was surprised when a caped stranger entered his home – but the homeowner turned the tables on the intruder.

It was just before 9 p.m. on Tuesday when the resident reported to sheriff’s dispatch that an unknown male around 40 years old, wearing a red cape and black pants, entered his home on New York Ranch Road in Jackson. The man was acting erratically, forcing the wheelchair-bound, senior citizen to act quickly to protect himself by grabbing a handgun, which ultimately convinced the trespasser to flee the residence.

When Deputies arrived, they found Erik Willden of Stockton, stealing items from a detached garage on the property while still donning the red cape, as seen in the image box pictures. After questioning, Willden admitted to deputies that he had smoked methamphetamine about six hours earlier. He was arrested and booked into the Amador County Sheriff’s Office Jail for burglary and being under the influence of a controlled substance.